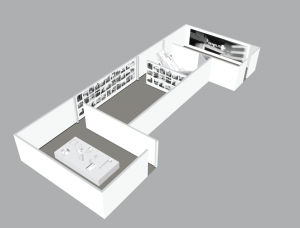 Architecture and the construction of buildings is one of the primary examples of mankinds eternal wastefullness. The building that was heralded as innovative 30 years ago is ugly and out of fashion today. And so it’s torn down, to make room for the next innovative building. In this respect the moment of demolition is a constant, perhaps even more so than the buildings as it stands, for it will be torn down at some point. This proposed exhibition focuses on that specific time,
when it came for buildings in Eindhoven, iconic buildings but also the mundane. For me this point in history is exemplified by the color white.

To further enhance this idea of inevatability and going round in circles, for every building will be torn at some time, the exhibtion is designed to be enjoyable in both directions. Some visitors will first go past the table with maquettes, moving on past the gallery of pictures, then spotting the tip of the St Antonius spire and finally viewing the video installation in the fourth room. Others will first see the video on their tour of the exhibtion but they will all have the alternation of media/maquette/media/maquette (or the reverse)/. The exposition is also layed out to give visitors a glimpse of what is going on in the next room through the doorways .

In this room a central place is for maquettes of some Eindhoven landmarks, but not just touristic sights long gone. The old townhall and the castle of Blaarthem would certainly be in the VVV brochures where they still standing. But the polynorm houses are more interesting during their deconstruction, as was the brickfactory. Others are important for the economy of Eindhoven, like the DAF officebuilding and the Philip Morris Factory. The final two are churches, the Pius X and the Maria Middelares. But no matter how important they were for the people that lived there, worked there or worshipped there, their fate was the same and they are now commemorated the same way: during the moment of demolition.

Four walls covered with square photographs, all of them of buildings being reduced to rubble. Underneath every picture I will place a bar denoting how much time the building has stood, then a small white line to denote time of levelling and then gray bar continues to denote how much time has passed since then. 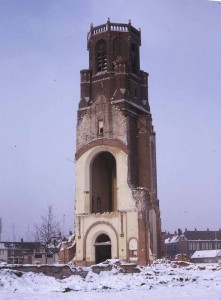 The first stone of this church was laid in 1908, but in the early seventies it was already unwanted. First the main body of the church was torn down, the point of the tower was removed and finally the spire was toppled using explosives. A great example of what this exhibition is about, this large scale model freezes the moment when the tower came, it’s not about what came before or after. It’s about this 1 moment.

The exposition maybe about frozen moments, but this doesn’t mean it’s a static, lifeless affair. There is always some deconstruction going on in a large city like eindhoven. This large area is dedicated to a piece of video art showing another building coming down.